Now that the FAA has lifted the ban on pilots using SSRI antidepressants, perhaps you'd like to read this commentary excerpt from another natural health advocate - 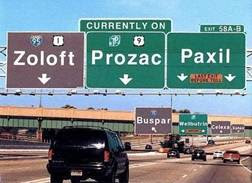 "Dr. Peter Breggin, a court certified psychiatric expert and author of numerous books on psychiatric drugs, reveals how GSK not only concealed negative studies, but also manipulated data about Paxil-induced suicidality so that actual suicide attempts in clinical trials were underreported, while attempts by subjects taking a placebo were inflated. According to Dr. Breggin, drug companies settle almost all lawsuits out of court in order to seal incriminating scientific data. “This deprives the FDA, medical profession and public of critical information on drug safety and efficacy,” he says.

There were 39,000 adverse event reports submitted to the FDA’s Medwatch, according to award-winning investigative reporter, Robert Whitaker. And that number is said to represent only about 1% of the actual number of adverse events. “So, if we get 39,000 adverse event reports about Prozac,” Mr. Whitaker said in an interview for Street Spirit in August 2005, “the number of people who have actually suffered such problems is estimated to be 100 times as many, or roughly four million people.”  Complete article

This is a very interesting blog and so i like to visit your blog again and again. Keep it up.

This is astounding data. The pharmaceutical industry lobby is very strong. It can influence from Congress to FDA and everything in between.

Obviously, when billions are at stake, results are skewed.