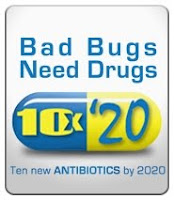 Once again we learn that another bacteria is on the rise and its leading to resistant infection.

I've asked the Infectious Disease Society to apprise me of status regarding using novel method to halt this before it becomes another base for death reports a la Morbidity & Mortality reports.

Be observant for fluroquinolone Rx, these fluoride based antibiotics have some severe side effects.

Bad Bugs Don't Need Drugs - They need courageous pratitioners who are willing to try my protocol and who dare to think outside the box.


Emerging E. coli strain causes many antimicrobial-resistant infections in US

The new strain, ST131, was a major cause of serious antimicrobial-resistant E. coli infections in the United States in 2007, researchers found. This strain has been reported in multiple countries and encountered all over the United States. In the study, researchers analyzed resistant E. coli isolates collected during 2007 from hospitalized patients across the country. They identified 54 ST131 isolates, which accounted for 67 percent to 69 percent of E. coli isolates exhibiting fluoroquinolone or extended-spectrum cephalosporin resistance.
"If we could discover the sources of this strain, the transmission pathways that allow it to spread so effectively, and the factors that have led to its rapid emergence, we could find ways to intervene and possibly slow or halt this strain's emergence," said study author James Johnson, MD, of the VA Medical Center in Minneapolis.
In the past, highly virulent E. coli strains usually have been susceptible to antibiotics, while highly resistant strains have been fairly weak in terms of their ability to cause disease. The susceptible strains were easily treated even though they caused serious infections, while the resistant ones tended mostly to affect only weakened or vulnerable individuals. Now, the study's findings suggest, the ST131 strain has appeared with a high level of virulence and antimicrobial resistance.
"If this strain gains one additional resistance gene," Dr. Johnson added, "it will become almost untreatable and will be a true superbug, which is a very concerning scenario."

###
Founded in 1979, Clinical Infectious Diseases publishes clinical articles twice monthly in a variety of areas of infectious disease, and is one of the most highly regarded journals in this specialty. It is published under the auspices of the Infectious Diseases Society of America (IDSA). Based in Arlington, Va., IDSA is a professional society representing more than 9,000 physicians and scientists who specialize in infectious diseases. For more information, visit www.idsociety.org.