GMO Now in the "WILD"


GM plants 'established in the wild'

Researchers in the US have found new evidence that genetically modified crop plants can survive and thrive in the wild, possibly for decades.
A University of Arkansas team surveyed countryside in North Dakota for canola. Transgenes were present in 80% of the wild canola plants they found.
They suggest GM traits may help the plants survive weedkillers in the wild.
The findings were presented at the annual meeting of the Ecological Society of America in Pittsburgh.


"Over time, the build-up of different types of herbicide resistance in feral canola and closely related weeds could make it more difficult to manage these plants”
Professor Alison Snow Ohio State University

More on the GMO Deception
"We just drew 11 lines that crossed the state [of North Dakota] - highways and other roads," related research team leader Cindy Sagers.
"We drove along them, we made 604 stops in a total distance of over 3,000 miles (5,000km). We found canola in 46% of the locations; and 80% of them contained at least one transgene."
In some places, the plants were packed as closely together as they are in farmers' fields.
"We found herbicide resistant canola in roadsides, waste places, ball parks, grocery stores, gas stations and cemeteries," they related in their Ecological Society presentation.
The majority of canola grown in North Dakota has been genetically modified to make it resistant to proprietary herbicides, with Monsanto's RoundUp Ready and Bayer's LibertyLink the favoured varieties. These accounted for most of the plants found in the wild.
Two of the plants analysed contained both transgenes, indicating that they had cross-pollinated.
This is thought to be the first time that communities of GM plants have been identified growing in the wild in the US.
Similar findings have been made in Canada, while in Japan, a study in 2008 found substantial amounts of transgenic rape - a close relative of canola - around port areas where GM varieties had been imported.
State-wide
What surprised the Arkansas team was how ubiquitous the GM varieties were in the wild.
"We found the highest densities of plants near agricultural fields and along major freeways," Professor Sagers told BBC News.
"But we were also finding plants in the middle of nowhere - and there's a lot of nowhere in North Dakota." 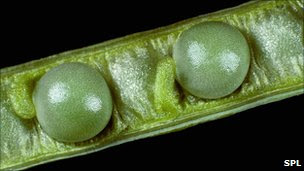 The GM seeds seem to be competitive, allowing a plant community to survive
Canola seeds are especially prone to dispersal, through blowing in the wind or through falling from trucks, as the seeds weigh just a few thousandths of a gram.
Professor Alison Snow, an authority on gene flow from Ohio State University who was not involved in the research, said that authorities had anticipated the existence of GM "volunteers" - plants growing in the wild outside fields - but did not consider it a problem.
"Regulatory agencies in the US have acknowledged that volunteer populations of GM, herbicide-resistant canola are expected to occur, as well as populations of inter-specific hybrids," she told BBC News.
"Over time, however, the build-up of different types of herbicide resistance in feral canola and closely related weeds, like field mustard, could make it more difficult to manage these plants using herbicides."
US policy is not to place a GM crop under any special regulatory regime unless there is a demonstrable difference between it and its conventional equivalent. The varieties in use here were deregulated in 1988 and 1989.
This is very different from the regime that has existed for a decade in the European Union.
But the European Commission recently recommended that nations should now be allowed to make their own decisions on whether to allow the crops or not, once they have passed health and environmental impact assessments at EU level.
Authorisations at EU level have been issued for GM potatoes, sugar beet, soya bean, oilseed rape, cotton and maize products.
Richard.Black-INTERNET@bbc.co.uk

More coverage
Posted by Unknown at 08:45