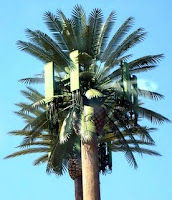 UPDATE: 26 APRIL - In the most recent communication I have received from this great group of parents fighting to protect their children, the Gilbert School District (GSD) has decided to "table" this project.
Please take some time to contact the GSD and let them know it is important to deny any future action on this plan and also to move to remove them from other school locations.
The fact that Clearwire's plans call for one of the towers "every 1/4 mile or so" shows a total disregard for people living in communities everywhere. The fact that they do this is also an indication of the cell industry's failure to educate customers, and potential customers, of the risks inherent in this technology.
Consumers too should take much more of an effort to ferret out the facts.
UPDATE: 19 APRIL - I just learned that there is a group of opposing parents that are fighting to get the tower constructed.  The school also wants the tower.  It is important to understand the science and the science is not just associated with the beam and the Hz rating.  The fact that the beam is ON constantly and the fact that the effect of the beam falls in an array are very important.  Everything outside the school building will be effected and exposed to microwave radiation.
PLEASE HELP SUPPORT THE EFFORT TO STOP THIS TOWER.
You can contact the Gilbert, AZ school district at the following contacts -

Posted 15 April -
Clearwire had plans to erect a 65-foot tower, disguised as a faux palm tree, right on school grounds, just a few yards away from school buildings where students spend several hours each day.

As concerned parent Chris Handorf explained to me, the tower would have been less than 10 yards from the school building.

He also explained that Parker Leavitt, the reporter, misconstrued his emotional expression. Handorf had been concerned about his father's health and recent major surgery.

The good news, though, that I learned last evening, is that a small, concerned, and dedicated group of parents in this Phoenix area community stood up and slew the (telecommunication)giant.

Now all that remains is for the Gilbert school district to remove the cellular antennas at all its other schools.


Cobb County in Marietta Georgia..  The situation is similar to ours with VVLE.  You can read the article.
http://www.ajc.com/news/cobb/parents-speak-out-against-163168.html
I called the guy that was in the article, Rick Welkis.  He gave me good information:
Rick's web site is: http://www.stopschoolcelltowers.org/
"One of the reasons that wi-fi companies are approaching the schools to build towers on school campuses is that schools are exempt from zoning and variance laws.
The generators have thick cables of 12 strands and they're are 4 or more cables running from the generator to the tower.
There is little regulation of the tower once it's built.  Lack of regulation and co-location is a huge area of concern.
We have to be aware that this type of notification - vote from the Town - can also be done during the months when school is not in session.  So we have to stay on our toes."  From Gilbert parents group.
Breakdown the money per child:
If the school gets the $20K:
Currently there are 625 students enrolled at VVLE (according to their website)
$20,000/625 = $32 per student
$1,000/625 = $1.60 per student per month  x 10 months (Aug - May) = $16.00/ student for the school year
So for $48 per student GPS/ Town of Gilbert /School is willing to put our children's health at potential risk.
The Los Angeles Board of Education has prohibited cellphone towers near schools.
http://www.lausd-oehs.org/docs/Press_Releases/CellPhoneTowers_PressRelease_2009_0529.pdf
The Los Angeles County Board of Supervisors & the City Council of Portland have passed resolutions that call on the FCC & FDA to revisit & update studies on the potential health effects of wireless facilities.  Some of the research that currently is being sited as saying that RF is safe is based on research done in the 1980's.  Now we have G3 & G4 technology and there aren't enough studies on that technology.
http://emfjournal.com/2009/06/04/los-angeles-county-board-of-supervisors-calls-for-repeal/
Photo: www.activecaptain.com

AND FROM AUSTIN TX -


No Cell Phone in School Zone' Signs Up

In CO they're putting them in church steeples so out of sight, out of mind. Until you get that brain tumor.

screw em. Lets go back to the land lines. For real.

I think people are stupid... less towers means you need sronger signals... in europe they are everywhere and the phones need less power... are you people saying your kids dont have cells...if they do YOU are harming them by not having more less powerfull towers...

We live in Gilbert, Az and I have 2 sons that are in the Gilbert public school system. I've been doing quite a bit of research lately on Electromagnetic Fields and frankly I am shocked & in complete amazement at the lack of awareness most of us are in. Most people think cell phones & microwaves are just fine (me included until recently) & have no idea of the harmful effects we are being exposed to. Multiple studies, world wide have been showing over & over the horrible effects these "wonderful tools" have on us. Please view the links I'm attaching by Dr. Magda Havas who examines & explains how harmful it is to place Wi-Fi and cell towers close to & in our schools. Dr. Havas has been studying the Magnetic Field for over 25 years! Our children are the future, however at the rate we're going, they'll be mutants in the next 20 years or die from cancer way before their time. Thank you.
Tracy

Here's what's up in Gilbert. Every school has at least one, many have 2. They are not cell towers. As another person said, they are microwave towers, which are very different. Many of them are GWEN towers, which use a Ground Wave Emergency Network. I helped build the original GWENs at Hanscom AFB. They travel at Ground level, unlike cells which xmit via satellite. These are very harmful. If a tower is NOT ACTIVE in the FCC Registrations, it is NOT a cell tower, even if owned by AT&T, etc. The feds are leasing these towers, and the Secret Service (Century Link) then upgrades them from cell to Microwave or GWEN. When a GWEN is activated, nobody will be able to walk. Same goes for microwave.