Weintraub has been writing on health for about 15 years from what I can find out about her, not a great amount of time exposed to the history on anti-aging health care, I'd say, but I am sure the naysayers and quack-watchers will use her report for fodder in the continual attack against non-mainstream medicine.
While I don't totally agree with Somers, I do know that anti-aging medicine has been around for a very long time and Weintraub's indictment is not so well placed.
After all, what is mainstream medicine?  It is nothing but hucksters for a buck because it is controlled by Big Insurance and Big PhRMA.  In other words, the bottom line reigns. 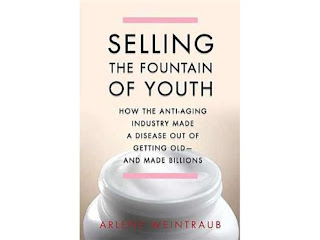 Selling the Fountain of Youth

The beauty industry--which once revolved around creams and powders, subtle agents to enhance beauty--has become the anti-aging industry, overrun with steroids, human growth hormone injections, and “bio-identical” hormones--all promoted as “cures” for getting old. Acclaimed BusinessWeek science reporter Arlene Weintraub takes us inside this world, from the marketing departments of huge pharmaceutical companies to the backroom of your local pharmacy, from celebrity enthusiasts like Suzanne Somers and Oprah to the self-medicating doctors who run chains of rejuvenation centers, all claiming that we deserve to be forever young--and promising to show us how. Weintraub reveals the shady practices that run rampant when junk science and dubious marketing meet consumer choice. She shows for the remarkable economic and cultural impact of anti-aging medicine, on the patients who partake and on the rest of us. It’s not a pretty story, but Weintraub tells us everything we need to know to avoid being duped by this billion-dollar--and dangerous--hoax.

America's $88bn anti-ageing industry: dangerous and with no scientific backing a new book warns that millions face serious health problems caused by the gurus of hormones and dietary fads...


By Paul Harris, The Observer -

The desire to defy age is as ancient as human history, but in the past 10 years a multibillion-dollar industry has sprung up in America promising decades of extra life and good health beyond your 100th birthday.
However, a new book has revealed a disturbing lack of safety regulation, outrageous unproved medical claims, risky products that could cause serious health problems, and a celebrity-dominated marketing machine promising an extended youth – much of it with little science to back it up.
Arlene Weintraub, who spent four years researching Selling the Fountain of Youth, says the anti-ageing industry has grown from virtually nothing to a staggering $88bn in 10 years, with few products and procedures regulated in the same way as normal pharmaceuticals and medical cures. Much of it is based on replacing the body's hormones as people grow older. But it also includes extensive use of products such as Botox, vitamin supplements and dietary fads. All have become hugely popular, but there is little proof that they work – or are 100% safe. Some female users of a popular hormone therapy called the Wiley Protocol have complained about their menstrual cycles starting again, with excessive bleeding and hair loss. The creator of the Wiley Protocol, a Californian called Susie Wiley, was found to have virtually no scientific or medical qualifications.
Such alarming reports have not slowed the huge expansion of the industry. The American Academy of Anti-Ageing Medicine (known by the acronym A4M) holds annual conferences that attract thousands of businessmen, chemists and physicians, all hawking their wares. Some critics of the organisation have dubbed it "all for the money" and say it has spearheaded the idea that getting old is basically a treatable condition.Across America chains of "rejuvenation centres" have sprung up touting the latest "cures" for getting old.
Weintraub argues that the current demographics of America have made the country especially susceptible to an anti-ageing message. The "baby boomer" generation – some 77 million strong – is just hitting the retirement age and millions are looking for ways to prolong their health and lifespan. "This generation, probably more than any before, wants to grow old in a different sort of way," Weintraub said. "Boomers have seen how their parents' generation aged and are trying to avoid that scenario."
She traces the birth of the anti-ageing industry to the discovery that human growth hormones used to treat stunted growth problems in children could also be used in adults, and in many cases appeared to have a rejuvenating impact.
The industry spread to include the use of Botox, derived from the deadly botulinum toxin and originally intended to treat muscle disorders. But anti-ageing doctors also frequently prescribe hormones such as testosterone and oestrogen, that are derived from plants such as yams and soy beans. Weintraub has documented cases where people are using such large amounts of these hormones, sometimes as skin creams, that their partners are absorbing them when they lie next to them in bed at night.
She says the main problem is that government regulation is too light and safety rules not as tight as for normal drugs, which require extensive medical trials before they get federal approval. She also points out that as ageing is not classified as a medical problem – and thus is not covered by insurance companies – the anti-ageing industry is largely founded on patients buying treatments from their doctors, which can easily lead to abuse and lax safety standards.
The industry frequently has its products touted on influential shows. It's highest-profile celebrity proponent is Suzanne Somers, a former actress on the sitcom Three's Company, who has written three books on anti-ageing and is a regular on the talk show circuit.
In her latest bestseller, Somers describes herself in 2041, when she will be 94: "Most mornings start with wonderful sex with my 105-year-old husband, Alan."Weintraub sees her book as a shot across the bows of such celebrity marketing. But she has seen first hand how powerful they are. Last year she was visiting an anti-ageing clinic when Somers appeared on Oprah. Suddenly the clinic was besieged by phone calls from interested potential patients desperate to stop the ageing process. "Their phones were ringing off the hook. It was crazy," Weintraub said.
Posted by Unknown at 10:32

Email ThisBlogThis!Share to TwitterShare to FacebookShare to Pinterest
Labels: anti-aging, fountain of youth