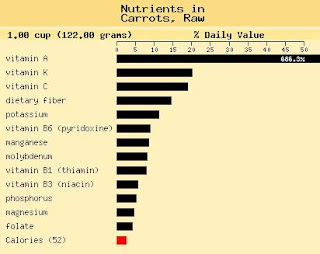 The lowly carrot has a whopping 686% of RDA as Vitamin A. More on health benefits of carrots here.

Carrots also help lower blood pressure, improve vision, protect your respiratory system, add fiber to your diet, and the juice has been used in natural cancer care for decades.

If you read the junque journalism of late you're told vitamin A is dangerous to your health.

Now you learn that carrots are anti-cancer. Juliette Levy told us this in her work on cancer in animals decades ago.
Cancer 1 Cancer 2 Cancer: A Nutritional Disease

The anti-cancer properties of carrots are more potent if the vegetable is not cut up before cooking, research shows.

Scientists found "boiled before cut" carrots contained 25% more of the anti-cancer compound falcarinol than those chopped up first.

The Newcastle University study will be presented at NutrEvent, a conference on nutrition and health, to be held in France.

Lead researcher Dr Kirsten Brandt, from Newcastle University's School of Agriculture, Food and Rural Development, said: "Chopping up your carrots increases the surface area so more of the nutrients leach out into the water while they are cooked.

"By keeping them whole and chopping them up afterwards you are locking in nutrients and the taste, so the carrot is better for you all round."

The Newcastle scientist, along with colleagues at the University of Denmark, discovered the health benefits of falcarinol in carrots four years ago.

Rats fed on a diet containing carrots or falcarinol were found to be one-third less likely to develop full-scale tumours than those in the control group.

Since then the scientists in Newcastle have been studying what happens when carrots are chopped and cooked.

The latest findings show that when carrots are heated, the heat kills the cells, so they lose the ability to hold on to the water inside them, increasing the concentration of falcarinol as the carrots lose water.

However, the heat also softens the cell walls, allowing water-soluble compounds such as sugar and vitamin C to be lost via the surface of the tissue, leading to the leaching out of other compounds such as falcarinol.

If the carrot is cut before being boiled, the surface area becomes much greater - and so the loss of nutrients is increased.

Eight of ten people favoured the whole vegetables over those that were pre-chopped.

This is because the naturally occurring sugars which are responsible for giving the carrot its distinctively sweet flavour were also found in higher concentrations in the carrot that had been cooked whole.

Dr Brandt said: "The great thing about this is it's a simple way for people to increase their uptake of a compound we know is good for you.

"All you need is a bigger saucepan."

Dr Kat Arney, of the charity Cancer Research UK, remained unconvinced that keeping carrots whole would have any impact on cancer risk.

She said: "When it comes to eating, we know that a healthy balanced diet - rich in a range of fruit and vegetables - plays an important part in reducing the risk of many types of cancer, rather than any one specific food."