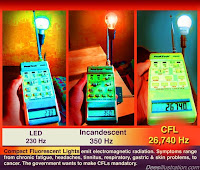 Mercury in new light bulbs not being recycled, escaping to environment

The nation's accelerating shift from incandescent bulbs to a new generation of energy-efficient lighting is raising an environmental concern -- the release of tons of mercury every year.
The most popular new light -- the curly cue, compact fluorescent light bulbs, or CFLs -- account for a quarter of new bulb sales and each contains up to 5 milligrams of mercury, a potent neurotoxin that's on the worst-offending list of environmental contaminants.
Demand for the bulbs is growing as federal and state mandates for energy-efficient lighting take effect, yet only about 2 percent of residential consumers and one-third of businesses recycle them, according to the Association of Lighting and Mercury Recyclers. SOURCE

24 Aug 2010 - Before buying in to the push to have you convert to HAZMAT CFL light bulbs, you may wish to review this information we have pooled from Natural Health News.


Natural Health News: Yes, CFL blubs are toxic in case you did not ...
Mar 22, 2008
For many years I tried to explain to people that there was a hazardous risk to using CFL light bulbs, now being promoted by all those greenies that jumped on the bandwagon without doing all the necessary research.
Natural Health News: Low Energy CFL bulbs causing a rash of problems
Jan 05, 2008
For several years now we have been warning against the use of CFL low energy fluorescent light bulbs based on their mercury content and the EMF emitted from the transformer (like the ballast in fluorescent tube lighting) as a health ...
Natural Health News: More Risk with CFL light bulbs
Jan 17, 2009
Over the past two years on this blog (Natural Health News) we have posted about a dozen articles regarding the risks of CFL light bulbs to your health. Many other warnings were sent in our newsletter, taught in our classes, ...
Natural Health News: LED v. CFL: We Vote for LED
Oct 22, 2008
Perhaps the ultimate "alternative to the alternative," the LED (light-emitting diode) light bulb may well dethrone the compact fluorescent (CFL) as king of the green lighting choices. But it has a way to go yet in terms of both ...
Keep Safety In Mind with CFL Bulbs

Dec 19, 2007
In Parliament (UK) a recent discussion was brought up in regard to the much advertised CFL light bulbs. What is never mentioned in all the advertising and promotion of these bulbs as a means to save energy is that they are a hazardous ...
UPDATE: Low Energy CFL bulb bombs
Jan 05, 2008
While the EPA is not doing its job at the Bunker Hill Superfund site, it has finally come out of the wood work to tell you these bulbs are considered a hazardous waste. However, it is the BBC and NOT the US media that is reporting - ...
Rash Report, not just CFL bulbs or Splenda: It is your cell phone
Oct 17, 2008
The issue of rash being caused by sell phone use is not a new report. This type of reaction has been known for many years but this new study shows - once again - that what you don't know about using a cell phone can and will hurt you. ...
Canadian Community Proclaims Electrosensitivity Month
Aug 16, 2009
Colwood Mayor, David Saunders, explains that relief for EMS sufferers can only be obtained by limiting exposure to radiation-emitting devices such as cellphones, wireless technology, FM and cell transmitters and CFL light bulbs, ...
More Fooling the People

Mar 27, 2008
AVISTA Utilities, the City of Spokane, WSU and the (questionable) Lands Council want people to buy into replacing incandescent light bulbs with mercury and EMF toxic CFL bulbs. We have been educating about the risks of these bulbs - AND ...
Oprah's Down the Rabbit Hole
Apr 23, 2007
If you are on the subscriber list to herbalYODA Says! you have received our Earth Day special issue on the CFL bulb. Yes, its that compact fluorescent light bulb (CFL) hawked every where as a way to reduce global warming. ...
Vaccine Vacillations
Oct 02, 2007
Remember that there is a supposed ban on mercury, yet today WalMart gets acknowledged for hawking mercury containing CFL light bulbs and not telling you they contain hazardous waste (mercury, a heavy metal that is heavily toxic). ...

The European Commission's Scientific Committee on Emerging & Newly Identified Health Risks" found that up to 250,000 people across the EU with eye, photo-sensitivity & neurological conditions could be at risk from the ultra-violet light from the new compact low-energy fluorescent bulbs.
Milton, Public Health Minister, said that up to 40,000 people in UK could be affected by this.
In 2008 research by the Health Protection Agency (UK) warned that the ultraviolet light emitted by CFLs & the flickering nature of the light they give off can
trigger rashes & lupus in people.

New US studies show a link to cancer.

I've been reading a lot of issues about CFLs and the danger it may bring. I don't know if I already need to change my bulbs at home. All of my bulbs are CFLs. My contractor who took his Contractor CE said that LED is much better to use.