Food Allergy on the Rise

The increase in food allergy is good to make note of because of several factors.

One of course is the ever increasing level of environmental toxicity in air, water and food.

Food coloring, additives and flavorings also are known to contribute to this health concern. Over processed foods (including cereals and dairy) and the increased use of highly allergenic or GMO soy in formula, pesticide use and other GMO foods must be considered.

One issue that for the most part that is overlooked is the effect of the myriad of vaccines forced on children from birth to the teen years, on GI problems and allergy.

Over and over again I am amazed at just how the gut issues in infants and small children become more prevalent, how troubling acid antagonist drugs are thrown at them (leading to many more serious problems over time), and how the use of simple remedies like real food, enzymes and probiotics are ignored.

Even children's prescription drugs include many colorings, flavorings and artificial sweeteners - all known to impact developing gastrointestinal and immune systems.

I wonder when common sense will return to health care and mainstream medicine. 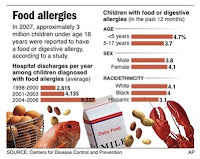 ATLANTA – Food allergies in American children seem to be on the rise, now affecting about 3 million kids, according to the first federal study of the problem.

But experts said that might be because parents are more aware and quicker to have their kids checked out by a doctor.

About 1 in 26 children had food allergies last year, the Centers for Disease Control and Prevention reported Wednesday. That's up from 1 in 29 kids in 1997.

The 18 percent increase is significant enough to be considered more than a statistical blip, said Amy Branum of the CDC, the study's lead author.

Nobody knows for sure what's driving the increase. A doubling in peanut allergies — noted in earlier studies — is one factor, some experts said. Also, children seems to be taking longer to outgrow milk and egg allergies than they did in decades past.

But also figuring into the equation are parents and doctors who are more likely to consider food as the trigger for symptoms like vomiting, skin rashes and breathing problems.

"A couple of decades ago, it was not uncommon to have kids sick all the time and we just said 'They have a weak stomach' or 'They're sickly,'" said Anne Munoz-Furlong, chief executive of the Food Allergy & Anaphylaxis Network, a Virginia-based advocacy organization.

Parents today are quicker to take their kids to specialists to check out the possibility of food allergies, said Munoz-Furlong, who founded the nonprofit in 1991.

When asked if a child in the house had any kind of food allergy in the previous 12 months, about 4 percent said yes. The parents were not asked if a doctor had made the diagnosis, and no medical records were checked. Some parents may not know the difference between immune system-based food allergies and digestive disorders like lactose intolerance, so it's possible the study's findings are a bit off, Branum said.

"This tells us those earlier extrapolations were fairly close," Sampson said.

The CDC study did not give a breakdown of which foods were to blame for the allergies. Other research suggests that about 1 in 40 Americans will have a milk allergy at some point in their lives, and 1 in 50 percent will be allergic to eggs. Most people outgrow these allergies in childhood.

About 1 in 50 are allergic to shellfish and nearly 1 in 100 react to peanuts, allergies that generally persist for a lifetime, according to Sampson.

Some people have more than one food allergy, he said, explaining why the overall food allergy prevalence is about 4 percent.

The study also found that the number of children hospitalized for food allergies was up. The number of hospital discharges jumped from about 2,600 a year in the late 1990s to more than 9,500 annually in recent years, the CDC results showed.

Also, Hispanic children had lower rates of food allergies than white or black children — the first such racial/ethnic breakdown in a national study.

The reason for that last finding may not be genetics, said Munoz-Furlong. She is Hispanic and said people in her own family have been unwilling to consider food allergies as the reason for children's illnesses. "It's a question of awareness," she said.