In all the years I have been following the issue of antibiotic resistance and increased infection rates I have seen few articles addressing the cleaning methods and chemicals used in health facilities.

This article may raise some issues but does little to accurately respond to the problems.

Most cleaning chemicals used in health cacilities are bacteriocidal and therefore have the same risk of becoming ineffective because of resistance.

Other factors are associated with the type of equipment used, such as the string mops in this photo from the BBC article. Generally it is the same mop used over-and-over during the day or a shift (8 hours). This practice does little to stop spread of bacteria. It is similar to the issue of hand washing and how bacteria is known to spread if you fail to wash your hands after working -on any level - with a patient before going to another patient.

A lot more understanding of why the thinking is wrong with this approach is needed.

Change has to address all of the factors in the process. There are better options than string mops. 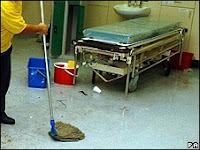 A US study published in the journal Microbiology found bugs that survive disinfectant contact can become harder to kill.

They evolve new defences which allow them to "pump" cleaning chemicals and antibiotics out of their system.

A UK expert said it was important that cleaning guidance was followed closely.


Biocides can be used in very very high concentrations, and provided this happens, then bacteria will be killed, and therefore not have the opportunity to acquire this resistance
Dr Adam Fraise
Birmingham University Hospitals

The NHS has recently met a target for the reduction of MRSA cases, but the rise of antibiotic resistance remains a problem.

Doctors have been told to use antibiotics sparingly, as overuse can allow harmful bacteria to develop resistance, but the new research suggests that some cleaning chemicals may also cause a problem.

The researchers at the Department of Veterans Affairs Medical Center in Detroit exposed Staphylococcus aureus bacteria to low concentrations of a wide range of antiseptic and antibacterial solutions, many of which are in common use in hospitals and the home.

They found that because the bacteria were not killed by the chemicals, they began to mutate into new strains.

These strains frequently had a higher number of "efflux pumps", a feature found on the surface of their cells which allows them to get rid of toxic molecules.

These were not tailored just to remove the disinfectant molecules, but also designed to get rid of some antibiotics, such as ciprofloxacin.

Dr Glenn Kaatz, who led the study, said that if bacteria in hospitals were exposed to "biocides" - antibacterial chemicals - repeatedly, they could build up this resistance, and even contribute to hospital-acquired infections.

However, Dr Adam Fraise, a consultant in infection control at Birmingham University Hospitals NHS Trust, said that the important thing was for cleaning staff to use chemicals in the recommended concentrations, and not to water them down more than required.

He said: "Biocides are not like antibiotics, in which the dose has to be kept at a level which is non-toxic to the patient.

"They can be used in very very high concentrations, and provided this happens, then bacteria will be killed, and therefore not have the opportunity to acquire this resistance.

"There are guidelines for cleaning staff about this in the NHS, and they need to be followed.

"However, there is an argument that you should be using these chemicals sparingly anyway around the ward, as there is some debate whether they are actually any more effective than simple detergents at reducing hospital infections."