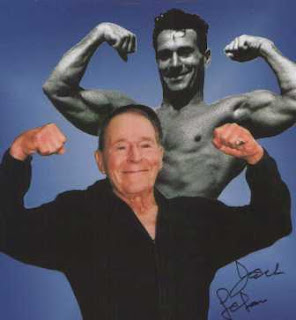 I am old enough to remember being a young mother and staying at home with my daughter, and following Jack LaLanne's exercise program pretty faithfully.

My daughter will be 49 later this year.  I hope some of what she learned from me has helped her.  She is an artist and a massage therapist now.

I tried to pass on to her much of what I learned from Jack.  He will be missed, not only by me but by many I know whose lives he influenced.

A new study reports that beta-glucan is very helpful for protecting lung health, just as is vitamin A (oil based) and vitamin C.


Summary:In a double-blind, placebo-controlled study involving 50 athletes undergoing strenuous physical training, results indicate that supplementation with pleuran, an insoluble glucan from mushroom Pleurotus ostreatus, may exert beneficial effects. The athletes were randomised to pleuran or placebo for a period of 3 months. At intervention end, a significant reduction in incidences of URTI (upper respiratory tract infections) symptoms and increased number of circulating NK cells were observed in the pleuran group. Additionally, a significant reduction of phagocytosis was observed in the placebo group alone. Thus, the authors of this study conclude, "These findings indicate that pleuran may serve as an effective nutritional supplement for athletes under heavy physical training."

Superb blog post, I have book marked this internet site so ideally I’ll see much more on this subject in the foreseeable future!