This is an interesting article for several reasons.

One, hops, the source of xanthohumol as mentioned in this article, has an estrogenic effect.  Usually in mainstream medicine the drug Lupron is used in the treatment of prostate cancer for its estrogenizing effect.

Perhaps taking hops herb and not beer might be an option, but if the doctors involved in this study had knowledge of herbs they might have drawn better concusions than suggesting finasteride.

Also evident is their ignorance about beer.  It contains such beneficial substances as IP6 and is much more nutrient rich. For the most part, German beer is really a food because it is not made in the manner of American beer.

The hand-crafted microbrews from the US are more acceptable than mass produced cheap, fortified beers, the hallmark of Joe Six-Pack.

Perhaps it is education that is needed in this conversation before it moves ahead. 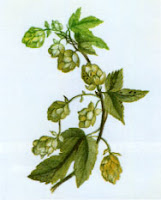 Hops is high in B vitamins, magnesium, zinc* and a number of other minerals, along with plant growth hormones.  Zinc* is a key nutrient for the prostate and all glandular health.


The compound in question, xanthohumol, is found in hops -- the bitter flavoring agent in beer -- and is known to block the male hormone testosterone, which plays a role in the development of prostate cancer.

"We hope that one day we can demonstrate that xanthohumol prevents prostate cancer development, first in animal models and then in humans, but we are just at the beginning," said lead researcher Clarissa Gerhauser, group leader of cancer chemoprevention in the division of epigenomics and cancer risk factors at the German Cancer Research Center in Heidelberg.

The findings were to be presented Dec. 9 at a conference of the American Association for Cancer Research in Houston.

Xanthohumol is a flavonoid, a group found in many plants, fruits, vegetables and spices. Studies of xanthohumol have shown that it blocks estrogen by binding to its receptor, which may lead to prevention of breast cancer, the researchers say. It's known that estrogen and testosterone receptors react in similar ways.

For this study, Gerhauser's team started with hormone-dependent prostate cancer cells and stimulated them with testosterone, which led to a massive secretion of prostate specific antigen (PSA).

"When we treated the cells together with testosterone and xanthohumol, PSA secretion was inhibited, and this was dependent on the dose of xanthohumol," Gerhauser said.

In additional experiments, the researchers found that xanthohumol binds with the receptor, preventing it from producing PSA.

Gerhauser's group found that when xanthohumol and testosterone were injected into castrated rats, xanthohumol blocked the effect of testosterone on the prostate, which potentially could lead to preventing prostate cancer.

"Although the prostate weights were not changed, xanthohumol still reduced the effects of hormone signaling, such as gene expression, measured in the prostate tissue," she said.

"Xanthohumol is a natural product, which blocks the effects of male hormone testosterone, and should therefore be investigated for prostate cancer prevention," she said.

Not everyone believes that beer looks like a potential solution to this disease, which affects one out of six American men and will kill more than 27,000 of them this year, according to the American Cancer Society.

Dr. Durado Brooks, director of prostate and colorectal cancer at the American Cancer Society, said that if beer could prevent prostate cancer, we would already see lower rates of it.

"Like a lot of findings, it's way too early. Showing that something works in a test tube and that you can impact rat prostates is a long way from demonstrating any sort of viability in humans," he said.

A better bet for men might be a drug (finasteride) which has been shown to reduce the risk of developing prostate cancer, Brooks said.

"Men need to understand that these drugs are not risk-free, but if a man is concerned about his prostate cancer risk then he should be aware that there are medicines out there that have been shown to be efficacious in decreasing the risk," he said.

Drinking a lot of beer is "not one of the things we recommend," Brooks said.

But it can and does.