As the Fourth of July holiday comes along this week end, here's wishing you a great time, and hope you BUY ORGANIC to avoid the risk of FRANKENFOOD 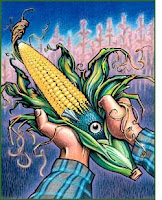 "If you put a label on genetically engineered food you might as well put a skull and crossbones on it."

And what about your Hot Dog on the Barbie?

Pass the Mustard, or Just Pass on the Hot Dog?

(OMNS July 2, 2010) More hot dogs are eaten at the 4th of July holiday than at any other time of the year. The National Hot Dog and Sausage Council (yes, an all-too-real trade organization) says that "during the Independence Day weekend, 155 million will be gobbled up" and that Americans will consume more than seven billion hot dogs over the summer. "Every year," they proudly proclaim, "Americans eat an average of 60 hot dogs each." (1)
That looks to be a modest average of just over one hot dog per week per American. But there are at least 7 million vegetarians in the US, and another 20 million who would be inclined to avoid meat. (2)
This means that even if you do not eat any hot dogs at all, someone else is eating your share.
But a hot dog or two a week? Big deal!
Maybe it is. Children who eat one hot dog a week double their risk of a brain tumor; two per week triples the risk. Kids eating more than twelve hot dogs a month (three a week) have nearly ten times the risk of leukemia as children who eat none. (3)
And it is not just about kids. Of 190,000 adults studied for seven years, those eating the most processed meat such as deli meats and hot dogs had a 68 percent greater risk of pancreatic cancer than those who ate the least. (4) Pancreatic cancer is especially difficult to treat.
Think twice before you serve up your next tube steak. If your family is going to eat hot dogs, at least take your vitamins. Hot dog eating children taking supplemental vitamins were shown to have a reduced risk of cancer. (5) Vitamins C and E prevent the formation of nitrosamines. (6,7)
It is curious that, while busy theorizing many "potential" dangers of vitamins, the news media have largely ignored this clear-cut cancer-prevention benefit from supplementation.
May I also suggest that you have your kids chew their hot dogs extra thoroughly. In landfills, "Whole hot dogs have been found, some of them in strata suggesting an age upwards of several decades." (8)
Bon appétit.

What's on your food - pesticide info
More on pesticides and watermelon


Watermelon is a great food for fiber and lycopene. Nutritionally speaking it is a great source of water for hydration plus


Powerful Antioxidants - Watermelon is high in Vitamin C and a good source of Vitamin A through its concentration of beta-carotene.


Lycopene - Watermelon is a very concentrated source of the carotenoid, Lycopene.  Lycopene has been studied for its antioxidant and cancer-preventing properties.  It has been found to be protective against many forms of cancers including prostate cancer, breast cancer, endometrial cancer, lung cancer, and colorectal cancers.  Watermelon contains a higher concentration of Lycopene than any other produce.


Vitamin C - Watermelon is an excellent source of Vitamin C so necessary for the body's immune system.  One one cup of delicious watermelon provides 25% of our body's daily requirement.


Vitamin A -  Through its concentration of beta-carotene, Watermelon supplies a rich source of Vitamin A, another cancer fighting anti-oxidant along with Lycopene and Vitamin C.  A cup of Watermelon supplies your body with over 10% of its daily requirement.


Vitamin B - Vitamin B is necessary for energy production.  Watermelon is rich in Vitamin B6 and B1, as well as magnesium and potassium.  Because Watermelon has a higher water content and lower calorie content than other fruits, it delivers more nutrients per calorie.


Arginine - Because Watermelon is exceptionally high in citrulline, an amino acid our bodies use to make another amino acid, Arginine.  Arginine is used in the urea cycle to remove ammonia from the body and allowing the production of Nitric Oxide, which relaxes blood vessels and helps to reduce high blood pressure.This also contributes to help for water retention and diabetes along with the B vitamins and C.

Watermelon Seed Tea is a long known health promoting beverage.  These days it is difficult to find watermelon with seeds, or organically grown. It is most often used to stimulate and cleanse your kidneys, and is well known in Asian medicine as well as the Edgar Cayce Readings.


CAYCE QUOTE ON REMEDY 1695-2:  For kidney stones
But at least once a day, three days a week, do take watermelon seed tea as a part of the water.  This would be prepared by pouring a pint of boiling water over a tablespoonful of watermelon seed (ground or cut) and allowing it to steep.  Let it cool, then strain and drink.  This will clarify those conditions that cause reactions in the kidneys and bladder, for, the lack of eliminations and the slowing up of the circulation causes a greater quantity of drosses to be held in the system, and these need to be eliminated from the body.
More will be eliminated through using this stimuli for the kidney activity than in most any way.

This may also be useful for infection (UTI) and as a diuretic.

Other resources:
http://www.whfoods.com/genpage.php?tname=foodspice&dbid=31#nutritionalprofilehttp://www.watermelon.org/health.asp
Posted by Unknown at 08:00

Great article. Could you do an article on the watermelon?

Thanks for the in-depth info on the watermelon, especially the seed tea and pickled rinds which is new information. Who knew the lowly watermelon was such a nutrient rich powerhouse.

Thanks for asking, and glad to respond to reader requests as I am able.

Hi this is a really amazing blog. I hope I can learn a lot from this blog about natural healthy ways. Oh and if you have some times, please visit my blog. Thanks!
http://enjoyandhealthy.blogspot.com/

Hi, I am against GMOs and I strongly oppose whatever is synthetically made that could harm the body. I'm glad that we share same views here, thanks. Let's go natural!

We should always consider eating the right food during holidays. It might be hard to stop eating what we want, but we should always limit our intake of them.

Natural Health
can be maintained and retained if we follow some basic principles of natural health care.